The Hardest Part of Writing with a Dash of Folly

I've never been a fan of editing and re-writing.

I know you're sitting there thinking, "Damn Todd. No Way. Your blogs are always so clean and polished with nary a typo or dangling participle to be found. You must surely edit all the livelong day!"

And while it's true that I try not to dangle too much on my blog, participle or otherwise, I don't really edit much. Mostly for typos. Any content editing to this little kaleidoscope of consciousness is usually done on the fly.  I know. I know. I hide it incredibly well.

Well, I mean, I'm a professional. That's what I do.

You know what else I do?

And by that I mean, you know what else I do now?

Here's the story...I never used to. I mean, not seriously. I would look for misused punctuation and the like, but I rarely took the hatchet of the red pen to my work. I was content to do my in-line editing and revising in the manner that had served me so well in the blogosphere.  I mean, if the 70 view average per post is any indication, I am killing it over here, yo.

I did a piece late last year for an anthology I was supposed to be in. I liked the idea. And I was confident enough to think what I wrote was good. So I turned it in.

Suddenly I wasn't so confident.

But I wrote the story. And I love it.

And I edited the crap out of it.

And I hated editing it.

But I realized something. It takes far more confidence as a writer to be able to edit your work than it does to just think it's good without editing.

After editing Shadow Initiate and releasing it in the box set, I realized two things. The first was that I was going to probably need to edit it again before I released it as a stand-alone novella (which is happening this Fall). Secondly, the story I turned in for the anthology last year was garbage.

That's not to say I didn't like the concept of the story. I absolutely loved the idea. I just hated the words I chose to express those ideas.

Luckily for me the release date of the anthology was pushed back.

I had another chance.

Instead of just edits, I took the hatchet to the story. I kept that bits that worked, axed the rest.

And in the end, you know what? I nearly doubled the length of the story and I think it's a much stronger story because of it.

This story also marks another Author Milestone for me. It's the first piece that I have actually sent off to an external editor that wasn't the squiggly red or blue lines in my word processor.   I don't have the piece back from the editor yet, but I'm looking forward to seeing what a set of professional editor eyes sees in the piece. Seeing where her and I agree and where we diverge.

It's all pretty exciting.

Thus..riding high on the wave of editing chutzpah, I have decided to embark on a new tradition. 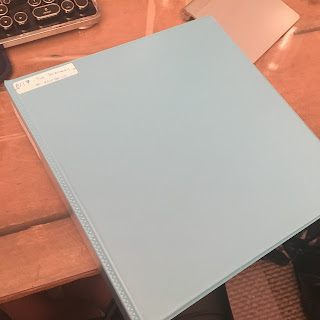 I bought a special notebook today. It will hold something ridiculous like 400 sheets of paper. Which is more than anything I've written. What I found when I was editing Shadow was that I liked to go through the print out and make the changes on the page then transfer those changes to Scrivener.  I know, right?! It's almost like I was developing a true writer's workflow.  Spoiler alert--I was.

How this works is, I will put a label on the cover going down top-to-bottom, left to right with the title of what's currently in the binder being edited and the month and year I started. The amusing bit of folly comes from thinking that in a few years time, the cover will be plastered with labels.

So, you might be asking, "Todd, what is the first book you're going to edit in this awesome binder?" 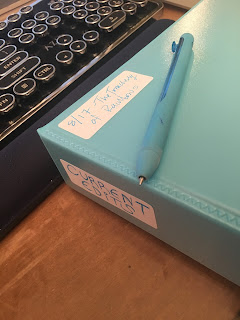 The first book in the binder is my NaNo spawn from last year, The Treachery of Rainbows.

I'm going to let you in on a secret. I think it might be a good book. I really like the idea behind it. And the feedback I got at the NCOW Writer's Retreat last year when I read snippets of it was very favorable. I was getting good feedback from writers I admire and look up to. It tells me that others think it has the potential to be a good book.

And yet, it sat on proverbial shelf for almost a year.

Remember when I said it takes confidence to edit?  I stand by that. I think I'm finally ready to face this book and see what we can make of it.

And it's in a spiffy new binder, to boot.

Onward and upward my friends!

I'm off to edit now, have a great rest of your evenings and a kick ass tomorrow!!