Caught Between A Sneeze and A Prayer

I use a Google Chrome browser plug in called "Momentum."  The first time you open Google for the day, it prompts you to put in a main focus (or several of them, like a to-do list) for the day. Like so: 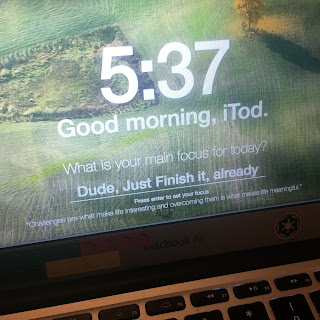 For the past 24 hours (yesterday and this morning), those reminders have had to do with buckling down and finishing NaNoWriMo (National Novel Writing Month for those who just literally found my blog for the first time ever, today).

Also for the past 24 hours, I have been caught in that 'almost about to sneeze' feeling. You know the one. There's a slight tickle in one or both nostrils, kind of up high, almost in the sinus, like someone is just gently rubbing your sinus from the inside. The nose starts to run. The eye that is on the same side as the affected nostril starts to water uncontrollably. No amount of nose blowing and eye rubbing seems to alleviate it and sniffling just exacerbates the issue and elevates it to the 'holy shit this is really annoying why can't I just sneeze already' level.

I am relatively certain it's just allergies. The snot is clear, not yellow or green colored as would befit the common cold. At this point, though, that is conjecture on my part. I have thus far avoided visiting WebMD. The last thing I want to be told on the last day or two of NaNo is that I have some rare Peruvian Aquatic Desert Bird Cancer or some shit.  Side note: have you ever noticed that nearly everything on WebMD might also be cancer? Did you eat something bad in the last 24 hours? You likely have food poisoning. But, in rare instances, vomiting and expelling recently digested food from both ends could also be a symptom of Peruvian Aquatic Desert Bird Cancer.  Really? Awesome. I can't even remember the last time I was in Peruvia. Hangnail? Yup, could also be Cancer.  You should really consult a medical professional before altering your entire life on a web search.

I feel like that little disclaimer is the one people miss. You know the one about the fact that WebMD is actually short for Web Medical Database, NOT Web Medical Doctor. It should have really been named WebMDb, but that's not really as cool or misleading now, is it?

So, allergies and not cancer, and finishing NaNo.

Yesterday kinda sucked with that whole allergy having to sneeze all day thing. I hopped my self up on allergy meds and just for grins, some DayQuil too, because why not?

I got about 1100 words in yesterday morning. I was planning on another 1000 or so at lunch and a solid 2 or 3 thousand in after work. It was a good plan.

A good plan that completely went to shit.

So, I broke the pattern for the week. A pattern, mind you, that was working. Blog in the morning, write at lunch, hit Starbucks after work and bang out a couple thousand words.  Had I done that and stuck to it, I might not be penning this cautionary tale this morning.

GAH! I just sneezed. Thought that would help. Nope. Just made it worse.

There is a thing with runners, particularly long-distance runners where they are just chugging along and they hit what feels to their body to be a literal wall. I think it's called, cleverly enough, the "Runner's Wall."  I don't run. If you have ever seen me in real life, you would realize that the last statement was completely unnecessary and likely put in this post simply to add three more words to today's word count.

No, I don't run. But I'm sure that what I hit yesterday was the creative's equivalent of the runner's wall. My body and mind had a little pow-wow behind my back and instead of driving to the 'bux to do some wording, I drove home. The plan was to eat some dinner and just jam on words. I didn't have to be at work early this morning since I have a doc appointment, so I was going to stay up late and smash out the remaining 6,000 words that I had left for NaNo.

I smashed 725 words, approximately. And I was falling asleep at my laptop.

I called it at that point. And I went to bed. I didn't try to go around the wall, over the wall, or even through the wall. I looked at that wall and said "fuck it, I'm taking a nap."

So that's what I did.

And now here we are on the last day of National Novel Writing Month. I will not have a completed manuscript or even a completely short story.

I do  have several blog posts (nearly a dozen) that should serve as (I hope) either inspiration or as cautionary tales to other writers and creative types.

Sitting at 900 words or thereabouts for this post. I really want to hit at least 1000 for it so I feel like I have made a good dent in what's left of the writing.

So, you might be asking yourself, Dude. You're not going to have a draft of a book OR a short story done for NaNo, and these blog posts are kind of repetitive at this point (have you seen the page view counts??)...Why bother?

That is a good question.  I'm sure there is a logical and perhaps inspiring answer to that question. But the simple truth is, I'm stubborn. And I'm too close to finishing now to give up.

The irony is, this month I was in very nearly the same place I was two years ago.

In 2015, I was a full-on 100% Pantser. I didn't plot, I didn't outline. Hell, I came up with character names on the fly (and had to keep looking back to make sure I used the same name consistently moving forward). And I had a kick-ass sci-fi piece I was working on. I was really in love with the piece.   But, because I didn't have a map, I hit the wall early. I hit 25K about 18 or 19 days in to the month and just got stuck. I had no idea where the story was going or why.  And I didn't think I could finish NaNo. I put up a few half-assed blog posts to try to increase my word count (some things never change). But I was done. It was like day 20 and I was done at about 24 or 25K.

Fast forward to this year.

DAY TWENTY FIVE OF THIRTY. Just in case you missed the significance of that.

By the end of that six hour event, I had passed the 30K mark.  That meant that in 5 days, I needed to write twenty thousand words to hit the NaNo goal.

That is roughly 4000 words a day needed. On my best days, that was a stretch.  And I knew that with  stuff coming up (work, needing to make some Christmas gifts for a party on the 2nd, and just life), it was going to be rough.  Here, let me show you what I mean: 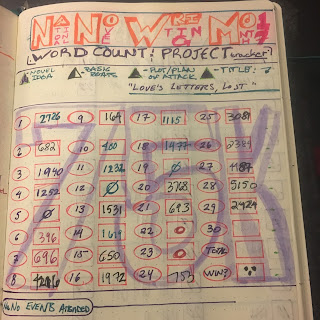 Those are my brutally honest, no holds-barred words for the month.  Not really so stellar. So, I wasn't really sure I could do it.

The difference, though, between 2015 and this year is simple. I have a wickedly strong support system this year that doesn't believe I will fail. When you have a group of people that have zero doubt that you can do a thing, even when doubt is dripping off of you, it helps. It seriously helps.

I know I'm going to hit my goal.

Here is the delicious irony.  You see up there, the 75K in highlighter? THAT was the goal I was going for this year. This year where I am pep talking myself in the last 4 days of NaNo (well, today is the last day, so nut up or shut up).  But if I had only done 2500 words per day, that goal was attainable.

2500 words is a morning blog or writing, and lunchtime writing. And maybe an hour of writing in the evening.

I can so do that.

Alright, I need to get ready now to head to the doctor. Gotta rule out that Peruvian Aquatic Desert Bird Cancer.

Have an awesome day and if you are participating in NaNo, finish strong. The only person you are competing against is the author you were yesterday.

See you on the other side.