Alright, we are in the home stretch of National Novel Writing Month. NaNoWriMo or NaNo or WhyTheFuckDidIThinkICouldActuallyPullThisOff if you are a writer participating in the annual event.

I am partaking of NaNo. I am close to finding a groove. It's not quite as back as Stella's but it's getting there. I have a story I like and one that I will continue to write after Thursday, the official end of the event. I'm like that guy that comes in 4 hours after the other Boston marathon runners are home chilling. I won't finish first. And I won't finish well. But if it's in my power (and it seems to be), I will finish.

I am finding that I doing a lot these kinds of posts this month. They are pseudo-pep talks. Mostly they are me sitting here trying to figure out why and how my brain works in relation to writing so that when I'm faced with something like this that actually matters (like being giving a word/time deadline by a publisher), I won't choke.

That's right, it was subtle, but if you missed it, I'll call attention to it. In the grand cheme of your writing career, NaNo doesn't actually matter. Finishing or "winning" NaNo won't make or break you as a writer.
Now before you jump my shit, let me clarify. To date, I am unaware of any publisher that will sign you as an author solely based on how well you did during NaNo. Your word count doesn't actually mean diddly.  The fact that you wrote, consistently, that is what matters.

And that is really what these posts are meant to help with. I need to get to the point where I can write when I need to, not just when I want to. So, I'm digging deep in to my brain bucket and trying to figure stuff out. Like the post the other day on social anxiety. I have it. It's fucked. And some days it really sucks. It sucks less now than it used to, but it still sucks. If you missed that post, there's a link over there on the right side, under November 2017. Or you can just click right here.

Today's topic (and let's be honest, word count filler) is the topic of doubt.

Doubt is a bastard.  And, as I am coming to realize, doubt serves absolutely no useful purpose.

Unlike it's bitch of a cousin, the ever-present Fear, doubt actually has no place in this world. Fear, while also a motherhuffer, can serve to keep you alive in certain situations. I think it is too rampant in our culture, but it does actually serve a purpose when not allowed to rule our lives.

But doubt does not. Doubt has no business at all in our lives. Especially in the lives of creative people. And yet we treat it like a billionaire's mistress. We give it legitimacy, we care for it, we cater to it, we give it a place to live. In short, we make it an indispensable part of the creative process.

Dude, fuck if I know. That's what I'm trying to figure out.  For me, it usually plays out like this.

Now, at this point, to bring this all home, I will tell you that the "thing" in question is hitting the NaNo goal of 50,000 words by the end of the month. When this conversation started I was at about 30,000 words with 5 days left. Meaning I had to average about 4,000 words a day in order to finish.

The doubt kicked in because I honestly thought too much about it. I thought about how much I had to do. November 30th is Thursday. I'm going to a party on Saturday. For this party I need to make a couple of gifts (they are paintings. If you're getting a gift from me this Christmas, it's probably going to be a painting, spoiler alert). And I also will be making an eclair cake for the party. So, I'm already thinking that I'm not going to sleep Friday night.

And then there is the little thing of having to go to work.

So I'm pretty much coming up with reasons that I'm going to fail. And all that is doing is feeding the beast called doubt.

That's dumb. No, it really is.

Yet, that's what I do. Maybe other creative people do it, too, but I know for a fact that I do.

So, in order to combat that a little bit, I set a tiny goal for myself. I say to myself, well, if I can hit 4000 words on Monday with life and everything else going on, then maybe it's possible. What do I do? Well, I get up at 4:45 and write for an hour before work. Get about a thousand words in. I write at lunch. I get another 1100 words in. I go to my favorite Starbucks after work and do some writing.  And roughly 90 minutes later I've written 2300 words.

I just literally and figuratively proved to myself that I could do it. That I could actually get the words down and do the writing thing that I had been doubting.

That's awesome, right? Well, sure. If I could let myself believe it.

You see, the doubt is so deep seeded that it likes to steal the victories. Instead of looking at this as a normal thing, a thing I should be able to do all of the time (because I proved to myself that I could), the doubt firmly plants its feet and says, "Wow. Good job. I mean, it was probably a fluke, but you know, maybe you'll get lucky three more days."

Fuck you, doubt.  But honestly, that is the shadow that followed my joy about the the achievement. It's like when you're playing a video game and you beat a level boss. You don't really give yourself (and the game makers don't give you) enough time to celebrate the win before you are immediately faced with another challenge. So the brain gets in to this mode of thinking, "Wow. Cool. I won. Now I wonder what jacked up thing is coming next?"

If you notice, the thoughts of doubts were not absolute statements.

If the doubt in my brain had said something like "There's no way you can do this for three more days," I could easily refute it by saying, "You're wrong. I did the thing. I have just proven to myself that I can do the thing. So, all I need to do is do the thing at least 3 more times."  At that point, the doubt has no power or hold over me.

But doubt is sneaky. It knows this. It acknowledges the win as its planting the seeds. "Oh, sure, you did the thing. But do you really think you can do the thing three more days without fucking up?"

It basically negates the proof that I can do the thing that I already proved I could do because I did it.

I think that's why doubt plagues the creative community as much as it does. I know that when I write or paint I seek validation that what I did was good or worthwhile. I want the people that I admire and love to partake of my creations and tell me that they enjoyed them. That was the hardest thing about my second marriage. All I wanted was some kind of validation from the person I loved that what I was doing was good. Do you know how hard it is to be married to someone who reads 5-7 novels a week and wonder what she thinks about your writing, because she never talks about your writing with you?  Talk about planting the seeds of doubt. It sucked.  And it's one of the reason I'm not married.

It's probably also one of the reasons that doubt has such a choke-hold on the root system of my psyche.

I'm working on it, though, really I am.

I have two books done. One was published earlier this year, and the other will be published next week (December 5th).  And I'm proud of both books. I really like them. Annnnnnd...the feedback I've received from people is that I actually might have a future at this writing thing.

All of that helps. It really does. And maybe someday it will be enough and I can just look at doubt and laugh when it starts trying to play its bullshit game. That day is not today, though. Today I still have to go through and pull out the weeds one by one. They have been there a long time. And they do not want to go without a fight. Fortunately for me, I have something that I know will help me defeat the doubt.

I have people that believe in me. People that know beyond doubt's long, cold shadow that I can do the thing.

And so can you.


Keep on doing you my friend and I have no doubt that you will rock! 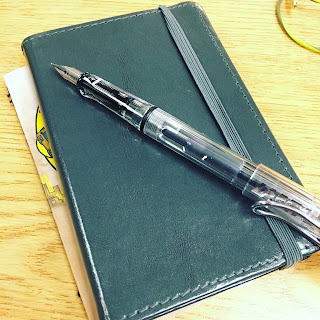