I'm going to off today's triumphant return to the lunchtime bloggy blog posts with a little haiku.
This isn't a completely original haiku. The original was regarding DNS and is rather funny if you are an IT person. I've adapted it for use in my own (admittedly warped) reality.

So, here's a little haiku to give you some insight on where this is all going.

Yeah. You guessed it. I'm eating my words again, and I'm finding that they aren't as sweet going back down my throat.

Up until this morning I was one of those people that would happily tell you that I don't get writer's block. If I get stuck, I change stories and work on something else.

And until last night at about 8:52PM, I probably believed that wholeheartedly.

But then, as I'm sitting there last night with 3 different windows opened on three different works in progress and a fourth open on an empty blog window, I realized something.

Stuck.  I had a short story that I was working on for submission to an anthology. The cap on length for that is 10K. My story was well over 6K last night and I wasn't really even in to the meat of it at that point. So, that one is looking like a book. Which, I mean, that's cool, but it kind of derailed me.

I'm going to tell you a secret.

I don't always do so great when plans change unexpectedly. Now, admittedly, on the surface, you would probably never know it unless you know the specific tic my eye makes or how the tone in my voice wavers ever so slightly. But if I had my mind set on a thing or goal, and it suddenly gets derailed even if it's derailed by something that turns out to be better, there is still a period where my brain has to reconcile the expectation with the reality. Sometimes that's seconds. Other times that's minutes. Or, you know, with some things, years. Just happens. It's the way I'm wired. I'm working on it, but it's not an easy fix. And I'm not sure it's a bad thing. The whole process of reconciling expectations and reality has often led me to some cool conclusions and some serious "a-ha" moments in my journey of self-discovery.

When my laptop died unexpectedly last week, I got derailed. YES, I have many work-arounds. And if you read the 'Oddly OK' post you might think I was OK with those work-arounds. But I realized last night that I'm in that period of reconciliation. And that period won't have any real hope of conclusion until tomorrow night when we find out if it's truly dead dead. So, I don't know how much writing I'm going to actually get done today.

Am I blocked? No. I don't think so. I'm just...stuck. There is, in my mind, a difference. For me, true writer's block is sitting there staring at a screen with absolutely no ideas and no thought as to when you might again find those ideas.  Obviously, like everything creative, there is no single definition that works for everyone in every instance.

I think the thing that threw me the most (other than the Air dying) was the fact that I had three separate story starts for this magic-themed anthology I'm trying to get in. And the first story idea led me to the second as I was a couple thousand words in to it. The second idea led me to the third storyline. That one is the one that just grabbed me by the short hairs and said 'Dude, you seriously need to be writing this.'  And I did. I was. Until I saw the word count and realized that it would be too long. So I did the worst possible thing I could do as a writer. I stopped. I didn't abandoned the story, but I realized that it wasn't the one. As awesome as it seemed to be in my head, probably not the one.

The questions are floating around my brain bucket like a cork in the ocean. And there's the crux of being stuck...overthinking.

I'm thinking about this shit too much. I need to go back to what I know (or what I think I know), and just frickin' write. I need to take that last $5 on my Starbucks card and camp out tonight at my favorite 'bux and just see what the fuck happens.

Sounds goods. Sounds like a positive plan. The problem is that there are at least 4 hours between now and the time I can do that.

And now we're back to the overthinking part. I think that for me, writer's block or even being stuck comes down to somehow getting in my own way. I had this expectation that I would somehow make December another 50K month for words. And I'm on day 12 sitting at maybe 2500, if I'm lucky. It's just weird.

Not really sure that any of this actually helps anyone out there trying to figure out how to get unstuck.

Maybe just write about why you're stuck

It's probably boring as balls to someone reading it (sorry about that), but at the end of it, you might find that you have just pounded out a thousand more words than you had this morning.

Guess I'm not entirely as stuck as I thought I was.

And now, since you put up with all of that shite, a picture of your intrepid author in a funny hat. 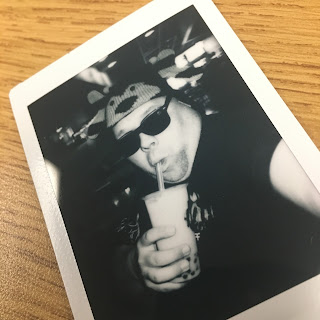 I should, by all accounts, be freaking out right about now. Most of my friends and even my daughter are kind of freaking out for me. Which is kind of them, but completely unnecessary.

I started this post on my Alphasmart NEO2 and am finishing it on a 2009 white MacBook unibody laptop.

If you know me, you know that neither of those are my normal every day blogging tools.

Nope, that would be the Mid-2011 MacBook Air that I got September of 2016. That Air is the laptop that wrote most of my first and second book on. I got it off-lease from Micro Center.  It's got some awesome stickers on it. And a tiny bit of sentimental value based on the fact that I, you know, finished the first two books on it and all.

I was doing a reset on the SMC and it just never powered back up.  I thought that I had done it with the reset. But, after doing some research on the googles, it looks like it was just probably its time to kick the bucket.

Which sucked, but dig this...I was actually OK with it. No, really. It's crazy, but I am.

I mean, to break it down, here are the facts of the matter.

In short there is absolutely nothing that will prevent me from writing. Sure, I was using Ommwriter to get some drafting done on my NaNo project, so I needed a way to read the Omm files.

I have Ommwriter on my iPad. So, that's covered too.

So, it's all covered. Which is why I was oddly OK with that laptop dying. I took it over to my computer guru Friday night (yes, even a geek needs a guru). He did some investigative work on it, tried reseating the battery and a few other things. Still dead.

There are two main things that could be fubar'd about it. The first being the logic board. If the logic board is toast, it's a few hundred dollars to repair. Which is about a few hundred dollars more than I have to spend on it. The second thing that could be dead on it is a daughter-board for I/O functions. That's about $50 to repair. Todd felt it a good idea to start with that. So, we did.

Now, here's the thing. I am still actually OK with the situation. It's not life-ending for my writing. I think I would be freaking out a lot more if I didn't have a desktop.

The bummer part is that I do like to do the drafting with Ommwriter (and the iPad just isn't quite the same). Fact is, for my money, there is nothing quite like an Apple laptop keyboard. I really do like typing on them. So, as OK as I am about this, I'm still a little sad to think the Air might be dead. And then I remembered this guy: 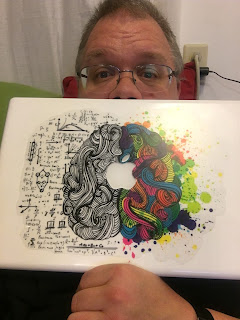 Yup. The mid-2009 MacBook that was mentioned at the start of this little bit of meandering ramblings.  I had given it to my mom when I got my MacBook Air. As luck would have it, she had given it to me to get it all updated so she could get to her writing.

So, it's going to be about 2 weeks until I know for sure if the Air is dead dead. And if it is, I'll run the Scrivener update on the desktop (since the 2009 white-body macbook won't support it).

And if it isn't, then life is truly awesome and I get it back and everything works out.

But the beauty of it is, it is going to all work out anyway. I think that's why I wasn't freaking out about it. Because no matter what, it's all good.

I'm going to keep writing. Even if it's fucking cocktail napkins. I'll still write. Because, you know...I pretty much have to.