I'm not going to lie. Well, I mean, I might. I'm a writer. It's kind of my thing. Let's just say that if I do lie, it will be all in the interest of telling a good story. Good. Glad we got that settled.

Where was I? Oh, that's right. The not lying.

Hi. I'm Todd. I'm a writer. And this is the obligatory what the fuck happened in 2018 and what am I going to differently in 2019 post that I know you have all been waiting for.

And by all, I mean maybe like 2 of you that were wondering if I would ever dust off this blog and throw some words up here.

To be honest, I wasn't sure I would. Not just the blog, though, I mean the whole wording thing at all.

OK. Not really. But what does make for great stories is people who are struggling. And their challenges and missteps and little victories all on the way to solving and conquering those challenges. Right? Sure. We'll go with that.

Admittedly, this is all pretty much self-inflicted, but that's mostly beside the point. Mostly.

Riding the high from a really good writer's retreat, I was pumped for National Novel Writing Month. I had a new direction for my book and I was feeling good about it. I attended a pretty kick-ass kick off event and even managed to get some words in the first few days.

And then I stalled.

Seriously stalled.  I don't know really what else to call it. I found myself coming up with some really good reasons why I just couldn't make the 60+ minute drive to attend the write-ins hosted by my base writing group. It became easier to convince myself that it didn't make sense to sacrifice 2 hours of drive time that I could be writing. And so I did. I convinced myself that the time would be better spent writing.

Only I didn't write.

I caught up on some reading. And cleared a lot of things out of my Netflix queue. And did some things around the house.  All of these were, in my mind, important things. Roadblocks that needed to be dealt with so I could get down to writing. To being a writer. You know, that thing I convinced a few of you I was way back in 2017.

Along around the same time, I was becoming seriously disenchanted with social media. Well, not all of it, just the book of Face, to be specific. I figured out why I left it some years back, and started to low-key loathe myself for coming back. So, add a failed  NaNo, and a dislike for the book of Face, and there's a few more steps down the spiral.

I deactivated my Facebook account sometime in December. I did it rather quietly. A week beforehand, I posted something about making sure if you wanted to stay in touch, we had a way to do so. And then I did an Irish exit and just deactivated my account. I had about 5 people reach out to me to see what happened. I had a few more than that sitting there and stewing about the fact that I didn't say goodbye personally or tell them what was going on.

And to be honest, I just couldn't. I needed to leave when I did the way that I did. I needed to do it to stay on this side of sanity and strike at least one solid blow back at the heavy, wet, wool blanket of depression that was pretending to offer me warmth, but slowly suffocating me. Whether or not you believe me, or are mad at me, or are OK with the way it went down--it's done. I can't change it. And even still, I think it was the right move for where my headspace was at the time.

So, yeah. That's a thing. Depression. I haven't really danced with depression in quite a few years. Not like this. When I would get up, go to work, zombie through the day, and do as little as possible before going to bed--not even talking more than a few sentences to my roommate, I knew there was an issue.

I still haven't talked to my doctor about going on anti-depressants. I have an appointment in February. That gives me one month to turn things around on my own. And by 'on my own' I mean that I'm not living in the bubble of 'everything in my life is great' any more. Somethings are wonderful, don't get me wrong, they are. I just need to get back to doing the things I know worked before when I was off the anti-depressants the first time.

I'm going to pause here and just mention that I was on anti-depressants for nearly 15 years. Many different ones through the course of that decade and a half. I know how my body responds to them and I know what they do to my sense of self. The last thing I want to do is to go back on them. That is not saying that I'm against them. I just don't want to be back on them. It's a very personal decision. So, I'm going to do everything I need to do before I open that door back up.

There's a thing going around where you pick a word, and that's your word for the year. It's supposed to be in line with your goals and who you want to be or become in the year to come.

It's a wonderful idea, but I honestly couldn't think of a word. Which really is just more proof that I need to get back to meditation and finding my center with more of a concerted effort.

Anyway...the hunt for the magic word that is going to make 2019 awesome.

And then I got an email from a kickstarter project I backed. The project was to help build a story-building/world-building system for gaming/story-telling based on using Tarot spreads. Today they drew a card for me.  And it went a little something like this: 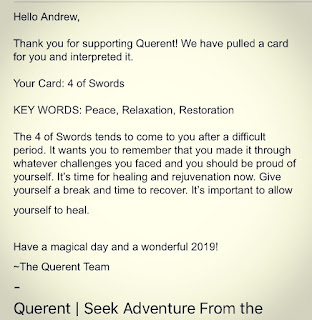 There it was. Restoration.

Everything clicked into place.  So, my friends, my 2019 journey is about restoration. Restoring the Todd that I know I am. The man, the friend, the father, the writer, the lover (ok, ok, but I had to at least put it on the list--you never know!) that I know in my heart I am. The true me.

One of the things I did today was to reconfigure my writing desk. It was spread out on a table in my bedroom and it just was...bleh. I moved in a dresser that had been sitting in the garage since I moved in and set up my computer on top of the dresser. I saw a movie depicting a madly drunk Hemingway pacing in front of a typewriter on a dresser in a Spanish hotel. And he was moving around and he'd come back, type some pages and move around. He did this weird dance with the story as he typed. And in those frames I saw the truth of it, much of writing is a full-body, full-contact experience. So, yeah, standing desk of sorts. It looks a little like this: 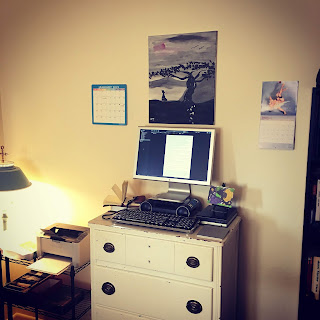 So, the cool thing about this, other than taking up less space and the fact that I no longer have to use the annoyingly squeaky but cool vintage office chair, is the fact that this dresser was my dresser all through childhood. Before that, I am pretty sure it was my big brother's dresser, and my mother's dresser when she was growing up before that. So, it's got family energy. It just feels right.

And if you're wondering, the painting above it was there before I figured out what I needed to do in 2019, but it so fits. Man does it fit! 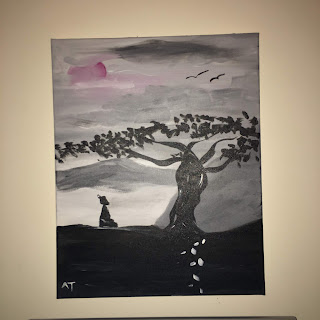 And so the restoration begins.

I set a goal at the beginning of 2018 to read 100 books from my Goodreads list by year's end. About a week into the year, I realized that was just ridiculous and recognized my own limitations in that arena. A goal of 50 seemed more reasonable, but will still be a stretch as it had been some time since I had read a book a week.

And I'm going to take that as a win. Because it's a lot closer than I really thought I could hit. 2019's reading goal will be 75. It's ambitious, but I think it's doable.

Ambitious, but doable. I guess most things are if you get off your ass, eh Skaggs?

Have a wonderful day my friends. I'll catch you sometime in the coming days, weeks, months...we'll get together, have a drink and catch up. I'd love to hear all about the latest crafting thing you found on Pinterest.