That's about the best word for what I'm feeling right now. And not stunned in the 'I just found out my wife prefers women' kind of way.  More of the "when I really take stock in what's truly been happening in my life recently, it's pretty amazing' kind of way.

Now before I get too deep into this, let me just say for the record. My wife did not come to me telling me that she prefers women. If she had, I'd probably be in a whole different place in my life right now and it would be where I am. It would be, well, different. And that would suck, because the likelihood of the events of the last 4 days unfolding the way they did would be slim, at best.

Last week, maybe 2 weeks ago, a friend asked me if I wanted to be her +1 to a dinner party with New York Times Bestselling authors Jason Reynolds and Brendan Kiely. There would be other authors there, too. As well as teachers, librarians, and other friends and family. I will be honest - I hadn't read either of these two authors. Nor had I read anything by the other authors that she mentioned.

However, I just recently finished Cal Newport's book on Digital Minimalism and there is an underlying current in that book of making better use of our free time to foster face-to-face interactions and experiences. I remembered reading of Thoreau walking into town to attend social gatherings, or lectures--anything but sitting at home being bored.

I am not either of those men. But I still said yes. And then this past Sunday (4 days before the party was to take place), I purchased this book: 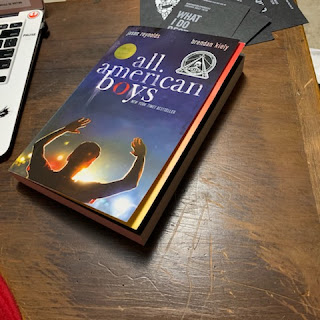 I started reading it. And I couldn't put it down. Trust me, there were times I wanted to. This was not a comfortable book to read. I later learned that it wasn't meant to be (but I don't want to skip ahead).

As a mostly straight, white, male, in his mid-40's in middle-America, I can tell you flat out that this book fucked with me. I laughed. I cried. I was angry. I was ashamed. I saw myself. I saw my friends. I saw the first black person I ever met way back in elementary school.

It would have been so easy to dismiss what I was feeling. The benefit of white privilege is that I can treat things like this like the refrigerator light. When the door is open, the light is on and it's kind of hard to ignore the fact that there is a lightbulb in the fridge, but when the door is closed - the lightbulb is out. Out of sight, out of mind. EVERYONE knows there's a friggin' light bulb in the refrigerator. But we don't talk about it.

But I couldn't do that. Not with this book. I had to sit with it. I had to let the emotions wash over me. Through me. I had to feel. I had to acknowledge the fact that feeling all of these feelings was the first step in having the conversation about the refrigerator light bulb.

To say this book was powerful and had an impact on me would do it a disservice. This book changed me. And suddenly I couldn't wait for Wednesday when I could thank the two men that wrote this book in person for the impact they had on my life with this amazing tale that obviously had so much of them in its pages.

So, Tuesday rolls around and I get a text from my friend.

"Do you have plans tonight?"

Turns out Jason and Brendan were giving a talk at the Hilliard branch of the Columbus Library and she could get me in to see them speak.

And after listening  to them talk about how they met, how they came to the idea of writing this book, and just the sheer differences in their worlds--the book became even more powerful.

Here were a some of the takeaways from last night's library talk.


'Black' and 'White' are not slurs. They are descriptors. Get past that.

It is impossible to write the story without putting yourself into it.

The only way to write an inauthentic book is if you lie to yourself.

Every bit as powerful as what Jason and Brendan said, though, were the questions from the students in the audience. That was what was truly humbling. These kids get it. And for now they are looking to us to help. But we have to meet them somewhere...either all they way where they are, or at least close to where they are. They won't meet us where we are. Our world is foreign to them. We have to go to their world.

This book was a window into that world. You need to read it. Because we need to talk about it.

This was originally not going to be a split post, but the full weight of the night I just had (it's Wednesday, for the record) has just landed on me and I need to just kind of get some of it on me, as it were. I need to let some of the things that happened tonight wash over me and I need to take a beat and pause.

There is more to this conversation, dear friends and fam. And if things go the way I think they will tomorrow, I'll have some free time in the afternoon to tell you about it.

Until then, go get the book. Read it. Finish it.

Seriously--you'll thank me.  Ok, honestly, you'll probably be pissed at me on some level. I'm OK with that. You need to read this book.