I was driving home from work the other day. From a job that will be on my list of places that I used to work starting February 22nd. Yes, I said it. I'm leaving the company I currently work for and will be starting a new job on the 25th. If you happen to be reading this and also happen to be a current co-worker, do us a favor and keep it to yourself for a bit, yeah?

Now, yeah, on the way home, I found myself behind this Cooper Mini and had a few thoughts going through my head. First, the car. 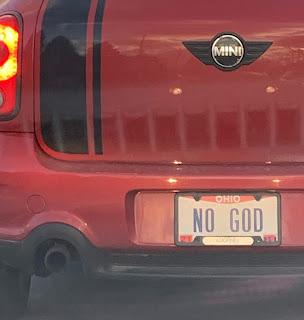 Rather than feel annoyed by the car moving slowly, I found myself focused on the meaning behind the plate. There really wasn’t any ambiguity in the text of the plate. And as.  Is my nature, when things are too easy, I tend to overthink. And that led me to the thinking of what it could mean. Was it the license plate of an Obvious Atheist or a Celver Christian? The front runner, of course, is the obvious atheist. Declaring that there is no god. Seems a bit pedestrian, although, I can think of a few people with the means to drive Mini’s that might just be willing to slap it in the face of the fine church-goers of a buckle hole on the Bible Belt.

My favorite theory, though, is that it’s actually some Christian using it as a conversation starter. I mean, imagine rolling into the church potluck in this little gem. So, you might be asking yourself why I thought it was a Clever Christian (maybe even a youth pastor at one of those big mega-we-don’t-sing-hymns-like-a-regular-church-but-still-want-your-tithes Churches.  I wouldn’t have thought that if it wasn’t in front of me.

The atheist would get the plate and expect someone to call it out. “There’s no god.” As in there goes the car with the license plate ‘NO GOD.’

But the clever Christian is counting on someone to talk about them from behind.
“There’s No God before me.”

Yeah? Since the car was in front of me, it was before me. No God was before me. So, I’m stopped at a traffic light laughing at how the license plate actually got me thinking of the 10 Commandments. That’s when I figured it had to be one crafty christian to pull that shit off.

And then I drove home.

There are 9 more drives home from the current job. It’s exciting. I’m sure that when they finally announce it sometime this week I will have more to say, but for now, I got nothing that I really want to go into about it. Other than the job will be challenging and I think it’s going to be a good fit for where I am in my life right now. And, it’s going to give me more time to be able to devote to my writing.
All of these are good things.
Speaking of that, I need to feck off and do some more of that. I’ve got a lot to right in 3 weeks if I’m going to meet my goal of having my first draft done by the next NEORWA meeting.
With that, I bid you good evening, fair visitors of SkaggleRock.
-Peace,
AT

Congratulations on whatever mystery comes your way. Very proud of you my friend.

Here's hoping this career move brings you to a new level of happiness!