I had a friend call me today, fuming. I consider myself a good listener on most days. Considering that I was out of town on a work trip and doing absolutely nothing in my hotel room, my listening game was on-point.

Instead, the frustration and anger I was feeling was because this complete waste of space had frustrated and angered my friend. And because he had further taken a big dump on any path of progress men could hope to have in quashing the rampant misogyny in our society.

I’m not even going to dive into the fustercluck of what a marriage is. (Love is love, leave your gender pronouns out of the definition of marriage).

So is marriage material, then,something on the list of things (both tangible and intangible) needed to make a marriage?

Last I checked, you needed 2 willing people with enough money between them to pay to file legal documents in whatever state they were “getting married” in, and the time to stand before a judge and get the official swearing of said marriage.

That’s it.  At its core, that’s really all of the material you need for a marriage. Two people and a contract.

But that’s not what this ass-clown said.

He was clearly reading a different blueprint for marriage. A person can’t be a document or the time to assert the vows.

So what was the not so subtle dig here?

That my friend was not worthy of a happily ever after? Don’t even get me started on that...because not all marriages lead to HE--at all.

Was he saying that she wasn’t good enough for him?  Bullshit. I’ve never met this dude, but if anything I know my friend is too good for him based on this conversation alone.

What frosts my nards about this kind of exchange is that the issue clearly lies with the dude. There’s some shit he’s got to work through about what he’s looking for in a partner. At its core, with or without the legal document or big fancy church wedding, a marriage is always a partnership. Period.

So, dude’s got some issues.

And he lashes out and puts the shit squarely back onto my friend.

THAT is the dick move.

Men...I’m begging you...pleading with you...kicking your ass in a drinking contest if necessary—whatever it takes to get this message through.

If YOU have confusion about something--like how to effectively communicate with someone you are interested in (no matter their gender)...own it. Don’t push that off on someone. If you can’t see yourself in a lifetime partnership with someone and you want to keep it casual (or you want to break it off), then COMMUNICATE and FOLLOW THROUGH.

DO NOT put that shit onto someone else. Nobody has time to shoulder their own shit AND yours. And that goes doubly for most of the women I know. They already have to shoulder enough shit heaped onto them by countless men in their life.

Don’t pile on to that heap.

I can guarantee that there is no woman that deserves to have your insecurities piled on to their own shit in the form of thinly veiled “keeping it real” talk.

And for fuckssakes...if you ignore my previous pleas and pile it on anyway, do NOT call her a crazy bitch when she calls you on your shit. You had that shit coming.

I actually have no idea if this is actually the 17th blog post I have written without a title. It could be. Probably isn’t. Not sure that it matters.

What does matter is that I am actually writing. This is the third blog post I’ve written in as many days. One of them is going to be on my friend’s business site (and I’ll be sure to post the link when it’s up). The other was written as a reaction to a conversation I recently had a with a lady friend of mine (not like that). I let her read it and she said it was OK to post, so that one is forthcoming.

On the plus side, it is drowning out the kids who are shouting and not understanding why they can’t hear each other (but somehow everyone can hear them).

In the seat next to me is a passenger who has the sniffles. Hopefully not a full on cold. I don’t need one of those. I had some spare fresh tissues and thought they would serve her better than the bathroom sandpaper she was using.

Across the aisle is...I don’t know what. A goddess? Probably not, but she is one of those women who has this kind of joie de vie that just radiates outward and makes her whole persona shine. I don’t know her name. I likely won’t know her name unless she happens to swipe right on me and what are the fucking odds of that happening? Not bloody likely, I can tell you that.  It’s ok, though. She seems to be one of those souls that you’re just supposed to experience and be the better for it. At least for a little while.

I don’t know where that came from, but I don’t think it’s a bad thing. Ya know? I mean, there is probably a non-creepy way I could have said that I enjoyed the laughs on the flight. The way the flight attendant scolded her for switching seats. The way she casually poo-poo’d it when I told her they sometimes had to redistribute the heavy ones like me when the flight is not quite full. She won’t know all of this. But those are the kind of people that somehow wind up in my book. There will be a character. And maybe she’ll read it and think, “Hey...that happened to me on a flight...I wonder…”

And isn’t that what’s cool about this life we are living? We never really know who we touch in our day to day interactions. She will likely think nothing of this, just another flight. But for me, I’ve just had the indelible image of a character for a book burned into the writing files that live in my head. Those are the gifts that make sitting in a planeful of cholera worth it.

Yes, it’s the time of year when people travel even when they are sick. So there is a call and response of cough, sneeze, cough, sneeze that would make the priest sitting in 27C proud.

I don’t know if I’m supposed to be comforted or worried by the priest being onboard. Faith and spirituality I’m good with, it’s religion that has become the estranged cousin in my life.

But I did have a realization as they were going through the safety demonstration. And I’m almost positive that I’ve posted something about this before. I guess this post is just a reboot, then. 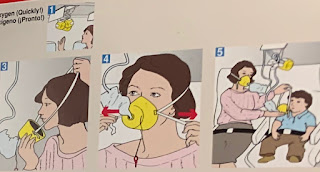 There’s a point in the demonstration where they talk about the oxygen mask dropping from above you. And they say that if you are traveling with someone who needs help that you should put your mask on first, before helping others.

And that kind of hit me.

How many times do we run around in life trying to make sure everyone has their mask on and we wind up passing out because we forgot to put ours on?

Too many damn times. That’s how many.

People, in the event of a sudden loss of cabin pressure, for fucksakes, put on your damn oxygen mask first.

You are going to be no good to anyone if your own mask isn’t on.

On some level, you MUST put yourself first. You have to make yourself a priority if for no other reason than someone in your life is counting on you to help them put their mask on.

And what did Tina the amazing flight attendant (who came back to me with the 2nd half of a can of Coke Zero and a new cup of ice) tell us?  Put your mask on first BEFORE helping others.

It seems such a simple lesson. A lesson that is really just common sense when you think about it. But how many times DAILY do we all fail at this on at least some level?

I’m guessing. Your number may be more, it may be less, but I can bet you that your number is not zero.

Here’s the other thing I learned. And this one is slightly more allegorical, but here goes.

In the (highly unlikely**) event of a water landing, your seat can be used as a floatation device. The takeaway from this is kinda straightforward. 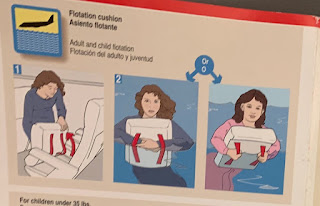 Sometimes you are going to splashdown in the shit. It happens. You’re going to get wet. You’re going to fall right on your bum into the drink. But never fear, your cushion can be used as a floatation device. Meaning, we already have the equipment to float and not sink. Look, I never said I was Brenee Brown here. I’m just a dude sitting on a plane writing a blog. What you takeaway from it is entirely up to you. Much like the whole self-help genre in general. Someone writes a self-help book...but in the end, the self that is reading it is in the one who has to act on the help that is prescribed. I’m not sure where that fits into the whole flight safety demonstration, but I’m sure it’s in there somewhere between the pretzels, Stroop waffle, and Biscoff.

I sure there is more I could say with this. And I know I took some pretty pictures of the flight safety card to go along with the post, but we’re beginning our initial decent, so Tina is going to make me stow my iPad and put my tray table back up.

So, peace out for now.


*-People always say they got ‘on the plane,’ but that’s not really accurate, is it? We actually get in the plane. Language is weird.

**-I always get a little nervous how much they emphasize that landing in the water is unlikely. It’s like, Dude...we’re flying into and out of New York, you fuckers are known for landing planes on the Hudson, mmmkay?!