Greetings my friends. As I do so often on these posts where I have been the absentee author, I will start off with an apology. I know that you have many options out there when you are looking for something to fill the 73 seconds at the end of your Outlander binge-fest before Netflix asks you if you are still watching and then silently judges you based on how long it takes you to dust off the cheesy-poof dust before grabbing the remote to answer YES. And you chose my little corner of the web. Thanks for that. I don't know how many of you regularly still read this, but if you do, thanks. I know I don't say it often enough, but I do appreciate you.

If you know me, you know that I packed a whole lot into that seemingly innocuous title up there. Hopefully we'll be able to unpack it all here before I get annoyed that there are actually people now in the lunchroom and try to wrap it up as quickly as possible.

No. I wouldn't do that. OK. I mean, I totally would do that, but since it's been something like 3 years since I've posted anything, I'm going to try to get through some of what's been rattling around in my head.

And man...the shit rattling around in my head...Wow. The past couple months have felt like that weird Fisher-Price toy. You know the one. It's like a ball...on a stick. And there are wheels. And kids push it around...and inside the ball are other tinier balls. And as the toddler toddles, the balls just pop around in like a bloop blop bork bonk bip boop kind of thing as the little agitator causes the balls to plop around.

OK. I am going to be testing my urges to keep writing while someone is listening to TikTok videos on their phone loud enough for the rest of the room.

It's weird. I can be in a coffee shop and there's enough other people there that the people noise becomes like its own ambient sound. But when there are only a few other people in a room that was previously silent...well...yeah.

Anyway...shit floating around in my brain. Theres a lot of it. I'm not really going to unpack much of any of that right now, because, to be honest I don't know that I'm really ready to process any of it right now.

I've been playing Magic the Gathering (sorry for the abrupt segue, but if you've read any of my posts you really should be prepared for the utter randomness that is me at this point). If you don't know what Magic the Gathering is, I won't bore you with the geeky details. Google it. It's a collectible card game. You build decks and "battle" other people who have also built decks. It's just fun. I've really gotten into it. The collecting...the building of the deck. My brain just falls into a happy place when I'm opening packs and looking through cards.

So...yeah...it's fun. There's a new set coming out this week. The new set is called the Mystery Booster. It's going to have cards from 15 different Magic the Gathering sets. I'm really looking forward to drafting. Drafting is where you open a deck...pick a card...pass the rest.. This is done until the contents of 3 packs have been reviewed and passed. And you have something like 45 cards that you have to build a deck from and then...woot!! Time to Battle. I don't really ever win (unless I get the bye, which I totally count as a win, by the way). But it's fun. It's a hobby. And it sort of gets me out of the house. And it's social (demented and sad, but social none the less. Thanks, Bender).

So that's kind of the ongoing fun event that is a slow little current of activity and one of the things I look forward to in my life.

Hey Todd, how come it's been so long since you've written anything on the bloggy blog or you know, talked about one of the three different books you've promised us by now?

I'm glad you asked. Let me clarify. I'm glad you thought of it enough to remind me about it. But, I'm sorry about the not having written anything in at least three fortnights. We've covered the magic part of the title. And thanks to your question, we're now into the imposter portion of the program.

If you have friends who are authors or artists of some point,  you will have no doubt heard of them talking about Imposter Syndrome. Whatever your take on it is, I can tell you, it's real. It may not be an official mental illness with a full-blown entry in the DSM-5, but it's every bit as crippling.

It's not a cry for attention, though it might seem that way from the outside. It is, at its core,

(We pause now, while your intrepid author moved from the TikTok'ing for Everyone Lunch Room and moved into another room that was, for now, empty)

You can see where it gets messed up with the shit ping-ponging around in my brain right? Like, I have to write...but at the same time, I feel like I'm complete shit as a writer. Thanks brain. And then any number of external factors or situations can pile on.

I don't talk about depression much. I've been diagnosed with it in the past. I say in the past because when I was diagnosed with it, I was on anti-depressants. In addition to keeping me at an even keel (so even that at the end it feel like I was a Zombie), the meds also sapped whatever joy I took from writing. So...when I got to the point where I thought my life (and by proxy, me) was stable enough to come off of them, I worked with my Doctor and did just that. The downside was, my wife at the time had never known me off of the meds. So, as I was getting back to what I (and anyone who knew me before I was on the meds) thought was the 'real Todd,' my wife (at the time) was seeing this person manifest in her life that she had never met. As I was getting more in touch with the Todd I had lost, she was getting a stranger. I know that's not the only reason that the marriage ended. But the part of me that wants to take blame for every bad thing that happens to me or people around me, wants to believe that it was a major factor in the divorce.

So...it's safe to say that when Imposter Syndrome is at its most fierce, I can say with a high degree of certainty that there is also some depression going on as well. It's a lovely little cocktail that has me wondering who the fuck I am and why I am even bothering. I have a good support system though. And I lean on them. Sometimes. Because...being me. I know, surmise, or can see, that they are going through their own shit. I mean. We all have it. We all go through it. It hits some of us harder than others. But when I'm going through it and I know a majority of my support system is too, I just keep it to myself. Or write shitty poems. Because to me, I don't want to bug anyone. Nobody really has time for my shit on top of theirs. Whether or not that's the reality or not, that's the facts that my brain comes up with.

And then there's the writer brain throwing imposter syndrome into the mix. I was happy and sad to learn that some of my favorite authors also suffer from the imposter syndrome. Happy because it's good to know that I'm not alone (there's a whole series I could pen on alone vs. lonely, but that's for another time). So,  yeah. Happy to not be alone. Sad because this author (many of them) has achieved level of success I aspire to and they still got Imposter Syndrome.

What the actual fuck? I guess being a world famous best-selling author won't  solve all my problems. It's a sobering thought. But, if you don't mind, I'm still going to keep that on the dream list and let you know how it turns out, mmmkay?

Good news is...I have a few very close writer friends who helped me talk through what was causing this latest bout of Imposter Syndrome. And I have a plan. I have a goal. I have a mission. And as you can see I am writing again.

And, in 9 days I will be at a writers' intensive workshop. Where 10 other people are going to critique a piece I submitted.

I'm also exhilarated. Not only do I get to go on a road trip with my best friend in the whole world, but I get to work with writers who are going to give me valuable insight into how to make my story and my writing better.

My pits are still a bit sweaty and my palms feel like the outside of a cold can of pop on a hot summer day, but it's going to be good.

And with the imposter syndrome quelled a bit, I can focus a little on what's contributing to the depression and general malaise. lt's cool, though, I don't really need a list of supplements or essential oils or stretches to do. I mean, I probably do, but I'm not in a place where I can receive them constructively without feeling like you are trying to fix me. Because if you are trying to fix me, then I must be something you see as broken. 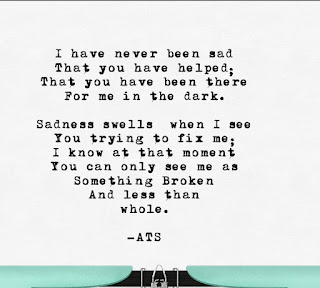 See--this is why I can't have nice things.

But I'm not going to end this on a down note. And this is a moment of growth for me. There was time in my life where I would have finished that sentence with some bit of deprecation along the lines of 'you didn't come here to see me mope about.' And that belittles one of the things this blog does for me. For me, this blog is an outlet. It's a way for me to work shit out. Some of this might help you. Some of it might not. Some of may just be a train wreck and you come with a fresh batch of popcorn to see what love I'm going to lament about this month. All of that is cool. It's honestly none of my business why you come here.

Here's the happy note I'm going to end one. It's actually 2 pictures. The first is what I consider to be the best potato chip ever. OR at least I did. Until a friend (the same friend who turned me on to the chips in the first pic) sent me the snack in the second pic.

It's a tough call. Really it's too close to call.

In any event, I need to get back to work.

I'm so glad you stopped by. I really have missed talking to you.