April 10, 2020
Today is a special day to me. For some it's the day that a guy was crucified and then came back to life three days later. I'm not getting into religion or messiahs in this post. But I do want to spend a few minutes talking about a hero.

It is borderline cliche to point to your father and say that he's your hero. Or to say that he's absolutely not your hero. While I may be borderline, I try to stay away from being cliche. My Dad is not a perfect man. And the word 'hero' gets bandied about a little too much these days for my particular liking. That being said, the man that is my father, is very special to me. He is an inspiration. He is a rock in my life. And he is one of my best friends and fiercest supporters.

But that wasn't always the case. Now, before you get all huffy, I need to clarify. My dad always believed in me. He loved me with a heart that was bigger than I ever knew as a child. He sacrificed things that I have no way of ever comprehending for me. Someday I may tell you more about them. Today is not that day.

This is a picture of my dad in 'Nam.

This guy graduated high school early. He went to college at 16. He had an interest in marine biology and poetry. And then a few years later he went to war. Because, that's what the Skaggs men did. There is a stretch of highway in Kentucky that honors my papaw and his 4 brothers. Every single one of them served. My dad served. He was assigned to Americal, 23rd Infantry Division. My dad, a printer by trade, assigned to the unit with one of the highest casualty rates at the time. He wasn't my dad yet. And, he might not have been if something crazy hadn't happened. If he hadn't been talking to an officer the day before he was due to meet up with his unit, he might have still reported to the 23rd, and who knows what this tale would look like. But no, that officer learned that Dad was a printer. And he had need of a printer at the base at Long Ben. He told my dad to not get on the bus, that he would get the orders changed and get Dad reassigned. Keep in mind, this sort of thing never, and I do mean never, happened once a soldier was in-country. So, it was natural that the officer on the bus was upset that this scrawny puke from who-the-fuck-cares Kentucky was insisting that his orders were to be changed. I don't know for sure, but I suspect Dad was close to being busted for disobeying orders.

Then the transfer papers came through. I don't know who that officer was that needed a printer, or even if he's still alive. If I ever meet him, I buying him a drink. Or 7.

To say that his time in Viet Nam changed my father is the grossest understatement I can imagine. Only, I didn't know it. I never knew him before.

I can say that growing up the son of a Viet Nam vet wasn't particularly easy. And I never did look at things in a normal way as a child (I really still don't).

Growing up, my dad always seemed...gruff....short...quick to anger. He yelled a lot. Only, it wasn't yelling, because if he was yelling, I would know it. I cried a lot. Still do I guess. In the Father's Manual of the 70's and 80's there were entire chapters devoted to 'Why are you crying? I'll give you something to cry about." I'm not making any judgement about it. I was salty for a while (like pretty much my teens and twenties).  We didn't talk a lot. He didn't come to all that many of my school events, but I never felt like he didn't care. More like he was just busy running a family business and too tired to be bothered with some of those frilly things. We communicated through my teens via Star Trek, M*A*S*H, Robert Redford movies, and later through China Beach. Any time something came on about Viet Nam, I stared straight at the TV and pretended to never noticed the streaks on my dad's cheeks.

I did some stupid things in my teens that I won't really go into here. But there were legitimately a few moments where I was thankful my mom was in the room because I thought my dad would go off. Instead he just sighed, left the room and left me to my own internal punishment. My thoughts were harsher most of the time than any whipping he could give. Still are.

I got married pretty young. I don't really regret it. The best thing that came from it was my daughter. And with that came some insight into what being a father meant. Dad was still a bit gruff...but softened with the arrival of his granddaughter. Things with us were still...somewhat tense, but civil. There were certain things I didn't talk to him about, Politics being top of that list.

In my twenties I think it's safe to say that I still felt like my dad didn't truly 'get' me. But, thanks to having a child of my own, I was starting to understand him a little better.

I'm skipping a whole lot here (mostly because this really deserves a book), but somewhere along in my 30's, on a trip back from the Farm, Dad gave me some insight into the perception I had of him as a child.

It was mind blowing. And every single thing clicked. It was harder for him to tell me than it was for me to hear (which is incredible, because it was a pretty fucking intense conversation to have anyway), but him telling me was the foundation that brings us to today.

Today my dad is not my hero, but there are aspects of his life and what he went through that would render boring any origin story in the comics. He is someone who is an inspiration for me. I know unequivocally that my father has my back. That he will support me no matter what I do. And that I never have to worry about him judging me or believing in me anymore (this was a very real thing I struggled with as a child).

Dad was never big on celebrating his birthday when we were growing up. It wasn't something he had a child and I truthfully think it makes him feel awkward when people make a fuss about him (I get that). Sorry, Dad...but I'm making a fuss.

I can say, with complete honesty and sincerity, that I would be nowhere near the man I am today without my Dad.

And it kills me that I can't go see him today. That I can't hug him. That I can't through choked tears tell him how much he means to me while pretending not to see the tears well in the corners of his eyes.

All I can do is have a glass of Knob Creek, FaceTime him later, and hope that as he reads this, I've done a halfway decent job of expressing how much he means to me and how much I love him. 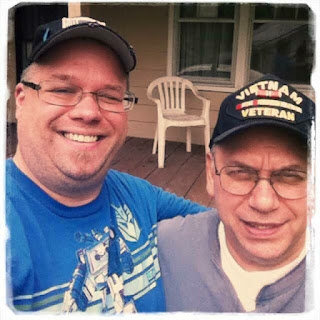 Terri-Lynne Smiles said…
Happy Birthday, Mr. Todd's Dad! You raised your son into a good man. That makes you a hero in my book.
8:27 AM

Darrin said…
This was a very nice blog entry, Todd. I enjoyed it alot.
9:54 AM